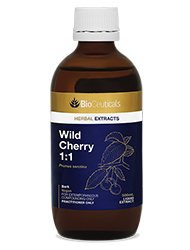 Background:
Wild cherry, also commonly known as black cherry, is a perennial tree that can grow up to 30 metres high.[1,2] The tree has alternate dark-green deciduous leaves, small white flowers, dark-purple fruit, and smooth, nearly-black bark that has an almond-like odour and astringent, aromatic and bitter taste.[2-4]

Native to North America, but mainly localised in the eastern states, wild cherry was one of the first North American tree species introduced to Europe in the 18th century, and it is now also widely cultivated in the Netherlands, eastern United States, Mexico and South America.[1,2,5]

Considered to have cooling, drying and general restorative properties, wild cherry bark is well known for its long history of use in western herbal medicine.[6-8] Wild cherry is also an important remedy in traditional native American medicine, with various tribes (including the Cherokee, Chippewa, Delaware, Iroquois and Ojibwa groups) using wild cherry bark.[3,6]

For further education and research, refer to the BioCeuticals Wild Cherry Monograph.