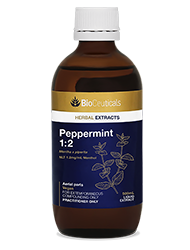 Background:
Peppermint, also known as American or balm mint, is a perennial herb growing between 30-90 centimetres high.[1,2] A natural cross-breed of water mint and spearmint, the herb has dark green oblong serrated leaves, purple flowers, with a distinctive and characteristic odour and taste.[1-3]

Peppermint is native to Europe and cultivated in many regions including North America, Canada and Africa.[1,2,4] The name Mentha piperita is derived from the Greek word ‘mintha’ in reference to a mythical nymph admired by the Greek god Pluto, who was transformed into a plant by his resentful wife Persophone, and the Latin word ‘piper’ (meaning pepper) due to its pungent flavour.[1,5]

Peppermint leaves have been used medicinally for over 2,000 years, with records of its use in ancient Greek, Roman and Egyptian times noted by naturalist Pliny the Elder (circa 23-79 C.E),[1,3] as well as in eastern and western traditions since the 1st century A.D.[6,7]

For further education and research, refer to the BioCeuticals Peppermint Monograph.