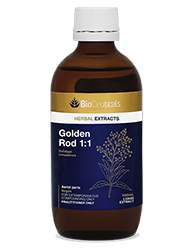 Background:
Golden rod, also known as Canadian or common golden rod, is a perennial herb native to North America. The herb was initially introduced to China in 1935 and is now widely distributed in many countries including Europe and Asia.[1-4]

Golden rod has been used in European herbal medicine for over 700 years and it also has a long history of use by native North American tribes.[1,5-7]

Keep out of reach of children.
Do not use if seal on cap is broken.
Store below 25°C away from direct sunlight.

For further education and research, refer to the BioCeuticals Golden Rod Monograph.