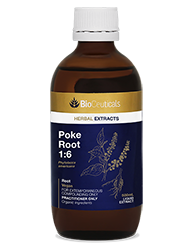 Background:
Poke root is a striking, large, perennial herb that grows up to three metres tall. It has large and soft fleshy leaves, tiny white flowers and long clusters of rich purple berries.

The plant originated in east America and is now naturalised in Australia and many areas of Europe.[1] It’s botanical name is derived from the Greek ‘phyton’, meaning ‘plant’ and ‘lacca’ meaning ‘milky’, in reference to the herb’s abundant white stem sap. Its common name, poke root, is derived from the indigenous ‘pocon’, which refers to plants that yield potent pigment dyes as this herb does from its berries.[2]

While the whole plant has medicinal properties, the roots are the most commonly used in modern western herbal medicine. Traditionally, it was considered to be both cool and pungent in nature.[2]

It was a prized herb of the Eclectic physicians and has also been used in the traditional Chinese medicine paradigm.[2]

For further education and research, refer to the BioCeuticals Poke Root Monograph.