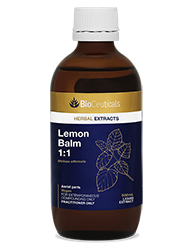 Background:
Lemon balm is a perennial herb that is native in many areas of the world, through Europe, Asia and Northern America, and its widespread use in traditional medicine systems follows suit. The medicinal properties of lemon balm were first recorded by the ancient Greek physician and father of pharmacology, Dioscorides (40-90 AD) in his ‘De Materia Medica’. Both Dioscorides and Pliny the Elder recorded frequent use of wine steeped with lemon balm and its topical applications.[2]

Paracelsus held the plant in such high esteem that he believed it could ‘completely revivify a man’ and even claimed it to be the ‘elixir of life’. It was especially revered by the medieval herbalists, who used it as a primary medicine for the treatment of humoral melancholy. John Evelyn saw lemon balm as a ‘sovereign for the brain’ and powerful memory strengthener, earning it a strong reputation as a simple for scholars.[2]

Nicolas Culpeper classified lemon balm as a herb of jupiter, ruled by cancer and acting as a constitutional strengthener, particularly useful as a ‘purgative of the brain’.[3] It also has its historical used roote in traditional Danish and Austrian medicine.[1]

Lemon balm’s botanical genus name, Melissa, is derived from the classical Greek word ‘melisso-phyllon’ meaning ‘bee-leaf,’ in reference to the bee’s attraction to its flower and the sweet quality of the honey produced from it.[2]

For further education and research, refer to the BioCeuticals Lemon Balm Monograph.