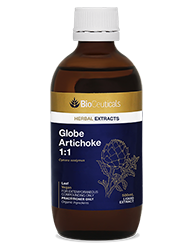 Background:
Globe artichoke is a large, perennial, thistle-like herb that is native to Mediterranean Southern Europe and Northern Africa, where it has a tendency to invade disturbed grasslands particularly in coastal areas.[1]

Its cultivation, mainly in subtropical regions, dates back to ancient Greek and Roman eras where it was used as a medicinal plant, garden ornamental and culinary delicacy.[1]

The pharmacological and therapeutic effects of globe artichoke’s leaves have been understood since the 17th century and it has been a popular medicine in many pharmacopoeias worldwide. Many modern studies have confirmed the stimulating properties of artichoke leaf preparations.[1]

Keep out of reach of children.
Do not use if seal on cap is broken.
Store below 25°C away from direct sunlight.

For further education and research, refer to the BioCeuticals Globe Artichoke Monograph.