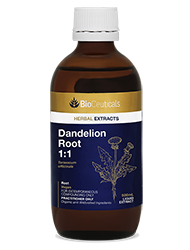 Background:
Dandelion is a perennial herbaceous plant with a large taproot, native to many areas of the northern hemisphere, that grows to around 30cm high. It is considered a weed in many parts of the world, but a useful one, as it has been employed both in traditional medicines and as a kitchen edible for centuries. It has hairless, shiny, deeply toothed leaves, reflected in the French common name from which the English derives: ‘dent-de-lion’ or ‘lion’s tooth’.[1]

Dandelion’s botanical name, Taraxacum officinale, has been claimed to have several origins. It may be derived from the Greek words ‘taraxo’ meaning ‘disturbance’ and ‘akos’ meaning ‘heal’ or ‘remedy’, or possibly from the Persian- Arabic word ‘tharakhcharkon’ meaning ‘edible’.[1]

The ground, roasted root is a popular coffee substitute with a similar bitter, earthy flavour.

Nicolas Culpeper designated dandelion as a herb of Jupiter, thereby having a cleansing and opening action. He recommended the use of the root in states of ‘cachexia’ (an ‘evil disposition of the whole body’).[2]

For further education and research, refer to the BioCeuticals Dandelion Monograph.