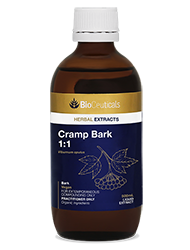 Background:
Cramp bark is a deciduous shrub that was first cultivated in Guelderland, a Dutch province[1], and grows four to five metres tall.[2] It is indigenous to England and North America.[1]

The bark of cramp bark is harvested in the spring and has a strong odour and mildly astringent, bitter taste.[1,4]

In traditional herbal medicine, cramp bark was used in America and Canada, and was employed by the Eclectic practitioners of the 19th century where it was used for a variety of conditions as well as a social beverage.[1-6]

For further education and research, refer to the BioCeuticals Cramp Bark Monograph.